The production of goods and services in the United States benefits our nation in multiple ways.

For starters, the creation of new jobs puts food on the table for many Americans; it also allows people of this nation to experience the dignity of work, while escaping the trap of government dependency. 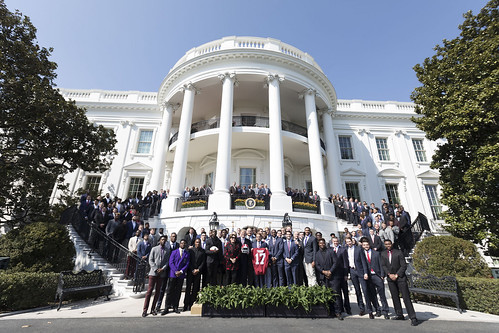 “White House” (Public Domain) by US Department of State

U.S. production furthermore benefits our nation’s economy in several different ways; the importance of the American economy continues to show itself amid the nationwide recovery from coronavirus shutdowns.

Next month, the White House is set to honor American production and economic gains, according to Fox News. This event will arrive despite the Biden campaign’s attempt to brand “Buy American” as something separate from the Trump administration.

On Monday, October 5, the White House will host an event that honors United States-based companies and American-made products. Acknowledged companies and products during next month’s event will also come from all 50 states across the nation.

Judd Deere, a spokesperson for the current White House, provided some additional information regarding what Americans can expect.

Over $4 BILLION has been delivered to more than 45,000 small businesses in Nevada through forgivable @SBAgov loans. pic.twitter.com/pQpEMPVn07

Deere maintains that next month’s Made in America event will focus on the “empowerment” of U.S. workers; the White House spokesperson also explained that since Trump’s time in office, he’s relentlessly fought to improve manufacturing jobs, domestic-made goods, and overall, economic growth.

Lockeheed Martin, Correct Craft, and Nautique Boat Company are just a few of many U.S.-based businesses that the White House will feature next month.

The Lifeblood of American Production

As the White House prepares for the forthcoming Made in America event, supporters of the current administration are noting how much the economy impacts American production.

Without an economy, it’s impossible for businesses and companies to put their goods and services on the market. Likewise, economic stability is necessary for consumers to be in a financial position to support U.S. production via buying American.

The economy and means of restoring it continue to come under a microscope amid partisan debates. GOP members have largely emphasized the importance of getting the nation back to work; meanwhile, many Democrats continue to argue that it’s not yet safe and call for greater government handouts.

Are you looking forward to the White House’s Made in America event next month? Be sure to share your thoughts with us down below in the comments section.