Philadelphia continues to suffer from night-after-night riots and unrest. These dangerous demonstrations are materializing after police officers opened fire on Walter Wallace Jr., thereby killing him.
Now, Black Lives Matter wants Americans to believe that Wallace’s shooting is a result of racism and “white supremacy,” however, the facts simply don’t bear this out. Viral video footage of Wallace’s shooting shows him walking around aggressively prior to events escalating. 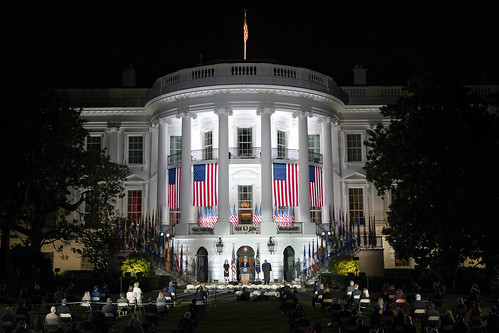 At one point, the now-deceased Wallace pulled out a knife and began charging towards officers. Despite being told several times to drop the knife, Wallace continued approaching the police holding a brandished weapon, hence leading to his demise.
Despite the facts and documented video footage, Black Lives Matter and other leftist activists continue to tear apart the city. Just yesterday, the White House issued a new official statement on the matter, according to Washington Examiner.

The Newest Official Statement on Unrest in Philadelphia

In the newest statement from the Trump administration, the body spoke in no unclear terms about the Philadelphia-based riots. Liberals and Democrats were held accountable for their “war against police” with the statement citing the violence in Philadelphia as a consequence of the left’s calls to defund and abolish law enforcement.
The statement then went on to remind that the “courts and justice systems” are the proper avenues for conflict resolution. Furthermore, the White House maintains that President Trump’s administration will never stand for “mob rule,” yet will always back the blue.

Our statement on the riots in Philadelphia ⬇️ pic.twitter.com/bfgPJDn9C2

Finally, the White House statement sent an important message to leaders in Philadelphia. The deployment of “any and all federal resources” will take place, should the leaders make a request for it. Thus far, this request has yet to happen, even after businesses and other community sectors with no relation to Wallace’s shooting continue to suffer.

No End in Sight?

The graphic footage of rioters ripping apart businesses and their own communities is disturbing to many Americans across the nation.
Unfortunately for Philadelphia, there doesn’t seem to be any end in sight. Riots in other cities like Kenosha and others have gone on for night-after-night, sometimes for weeks.

Footage from inside a Philadelphia business shows looters destroying the place within seconds during the BLM riot. https://t.co/yz81zf8E6j

Right now, the onus is on leaders in Philadelphia to reach out to the federal government and ask for the necessary assistance. This would allow for a return to civility, law, and order; however, Democrat leaders continue to resist and reject the White House’s offers to bring an end to riots in their communities.
What do you think about the latest statement from the White House? Will Philadelphia leaders ever request assistance from the federal government? We want to know what you think down below in the comments section.