During the earlier phases of the 2020 presidential election, Hawaii Representative Tulsi Gabbard (D) took a shot at seeking the White House.
Gabbard’s campaign stood out from that of other Democrats, especially regarding her foreign policy stances and overall tone. Despite her status as a Democrat, Gabbard managed to gain respect from many conservatives, due to her willingness not to demonize Americans who disagree with her politics. 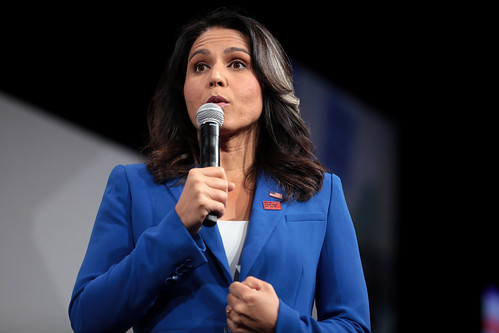 Why Did Gabbard Scrap the Defamation Lawsuit Against Clinton?

Lawyers representing Gabbard professed that coronavirus and the presidential election are reasons why the suit against Clinton has been dropped.
In a statement, legal representation for the Hawaii congresswoman stated that despite the merit of the lawsuit, “defeating Donald Trump in 2020” and dealing with present and future circumstances caused by coronavirus are where Gabbard’s attention is focused.

A clip of CNN gushing over Tulsi Gabbard in 2012, and how they felt she was a 'rising star' in the Democratic Party.

The difference between then and now? She later criticized Hillary Clinton's destructive foreign policies and corruption within the party. pic.twitter.com/bJQM7u5KVY

The Hawaii representative initially filed the lawsuit in January 2020, denying Clinton’s “Russian asset” accusations. Furthermore, Gabbard stated that the two-time failed presidential candidate harbored resentment against her for supporting Bernie Sanders in the primaries of the 2016 election cycle.
Shortly after the lawsuit was filed, Clinton and her attorneys were said to have intentionally dodged being served with the applicable paperwork. Thus far, Hillary Clinton has yet to issue a public statement about the scrapped defamation lawsuit. She has, however, remained vocal in her criticisms against President Trump and his response to coronavirus.
What do you make of the now defunct lawsuit against Hillary Clinton? Do you think Tulsi Gabbard should have continued taking legal action against Clinton due to her unfounded allegations? Enlighten us in the comments section below!