The continued presence of coronavirus is prompting concerns about not only public health, but also the economy. As businesses continue to shut down, many Americans have real anxieties about the economic ramifications, especially if these closures last for extended periods of time.

Already, many employees across the nation are experiencing job loss, furloughs, and layoffs. Countless business owners are forced to shut their doors and potentially lose all income as mayors and governors mandate city and state-wide closures. In light of all this, many Americans are looking to President Trump to share what his next move will be.

Breitbart News confirms the president’s vow to listen to health officials, but ultimately come to his own decision in regards to our nation’s economy.

Trump on Coronavirus, Public Health, and the Economy

Yesterday evening, President Trump talked to members of the press for roughly 90 minutes. During this time, he fielded questions about whether or not he’ll heed the recommendations of doctors regarding the balance between public health, the economy, and imposed limitations due to COVID-19.

"I'm not looking at months, I can tell you right now. We are going to be opening up our country." – @realDonaldTrump pic.twitter.com/8Su7YuwFiR

The president ultimately stated that while he respects the doctors working with him and will certainly hear them out, he will ultimately make the final call regarding the economy. Trump then revealed that doctors may call for America and the world to shut down for years out of caution.

More from Trump on Re-Opening the United States

Explaining that months and years-long shutdowns can’t happen, the president also pointed out the consequences that tend to follow in the wake of extreme economic decline and sickness. 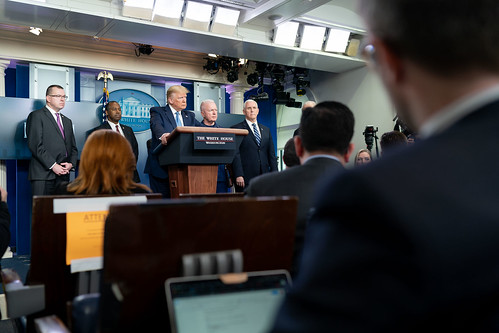 Just some of the many consequences are depression, anxiety, and even suicides. Finally came Trump’s reminder that America has the capacity to do “two things at one time” and that present restrictions will only last for weeks rather than months.

This news from the president comes days after the emergence of an anti-malaria drug that could possibly treat or lessen symptoms of COVID-19.

What do you think about the information revealed during President Trump’s press conference? Is there a need to preserve both public health and our nation’s economy? Sound off with your thoughts in the comments section below!