Democrats are livid with President Trump right now. They’re not only livid about his rejection of conceding a still-underway presidential election, but the left is livid about the strong, ongoing support for Trump. 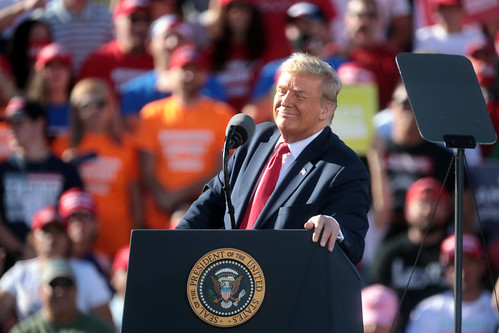 Despite the Democrat Party’s work to steal the 2020 presidential election, Trump is fighting this in court and he’s not giving up. The president, his aides and allies, all report innumerable examples of voter fraud; this is a reality that left-wingers refuse to face and are instead pretending isn’t real.

Yesterday night, a conversation that President Trump had with the New York Post published; in this interview, Trump provided extensive details regarding where he stands on the 2020 presidential election, confirms Newsmax.

While speaking with the New York Post, Trump held absolutely nothing back. Referring to the 2020 presidential race as “a rigged election, 100 percent,” the president also noted the issues with Republican ballot watchers being kept from overseeing the counting of votes.

Trump furthermore maintained that while he can’t affirmatively state what’s to come, he can hold Dominion Voting Systems accountable for its role in rigging the 2020 presidential race.

The media does NOT choose the president! pic.twitter.com/lZK4mxOk6o

The software was already found to wrongfully give votes for the president to Biden in Antrim County, Michigan; after the correction of Dominion’s error, it turned out that Trump, not Biden, actually won Antrim County. It’s important to be aware that this same faulty software remains in use across the country.

Additional issues with Dominion Voting Systems also deal with its ownership. This is another matter that President Trump pointed out; the president noted that investors and owners of the voting software are conveniently linked to the Democrat Party. Furthermore, Trump explained that Texas actually refused to use Dominion, due to its lack of security.

Each of the issues Trump listed above, along with others, remains heavily involved in litigation. The president’s attorneys presently have several ongoing lawsuits across the nation; Dominion Voting Systems and the ban against GOP poll watchers seeing ballot counts are only the beginning.

The Trump campaign is citing sworn affidavits of different voter fraud accounts as evidence; they’re also pointing out the issues with the illegal inclusion of backdated ballots and ballots arriving after Election Day.

Thus far, the litigation in the 2020 presidential election remains very much alive.

What did you think of President Trump’s interview with the New York Post? Share your thoughts with us in the comments section below!