Yesterday, Joe Biden traveled to Warren, Michigan in order to read a speech from a teleprompter. Ultimately, the former vice president’s speech revolved around “[buying] American” and the various policies he’d implement as president to make this happen. 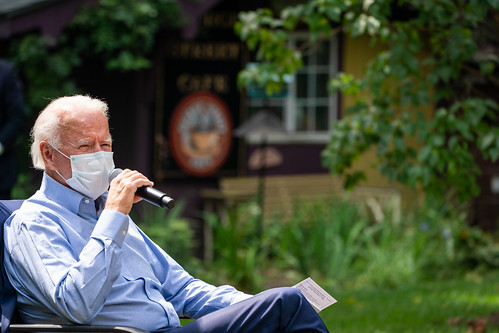 Like the select in-person campaign events that Biden has engaged in, yesterday’s time in Warren did not, in fact, go off without a hitch. As a matter of fact, the former vice president appeared to stumble through his speech at times; despite reading from a teleprompter, there were times that Biden seemed confused or otherwise disoriented.
However, reports from Washington Examiner confirm that problems at Biden’s Warren appearance were not mutually exclusive to his speech. The event itself also led to a confrontation between Trump supporters and Biden supporters.

Team Trump vs. Team Biden in Warren: The Facts

On Wednesday, Trump supporters actually greeted Biden upon his arrival in Warren. Various videos and pictures surfaced online of Americans standing with pro-Trump flags and signage as the former vice president arrived to speak at the United Auto Workers headquarters.
At some point, Biden supporters also showed up with far-left, pro-Biden, and anti-police signage. The former vice president’s fans also accused Trump supporters of “egging on ugliness.”
As Biden supporters waved their signage and maintained their opposition towards backers of the president, they also confirmed their fears on the future of the nation.

WARREN, MI — Outside the UAW HQ where Biden is speaking, a group of Trump supporters and two Biden supporters exchange harsh words. One guy from Trump group yelled about Hunter Biden needing to pay child support and something about cocaine from China. Like Twitter in real life. pic.twitter.com/Hs69tI0JeA

Many Trump supporters took issued with various troublesome and untrue talking points made by the former vice president during his speech. The president’s fans pointed out that Biden’s noted support of shutdowns is only “empowering” China; likewise came Trump supporters’ claims that pro-Biden unions don’t represent unions as a collective.

The showdown seen in Warren yesterday speaks to some very real political and social divides in America.
Despite Biden’s talk of “buying American,” his policies and rhetoric haven’t always lived up to this. It’s a reality that both President Trump and his supporters have drawn attention to; it’s also why the former vice president continues to take heat for things such as his promised ban on fracking and history of shipping U.S. jobs over to China.
https://twitter.com/TeamTrump/status/1303473323804950529
Even as the nation battles coronavirus, Biden continues to fault Trump for COVID-19, rather than its origin of Wuhan, China.
What do you make of the showdown between President Trump’s supporters and Biden’s fans? Do you think the right and the left will clash again in this nature before November 3? Let us know in the comments section down below!