Despite the severe impacts that coronavirus wreaked upon the nation, the American economy is gradually coming back.

As parts of the country reopen, jobs and economic stimulation are regularly returning. Recent weeks have marked new lows in unemployment claims in addition to more job gains. Furthermore, many businesses that have reopened are hiring and looking to bring new workers on board. 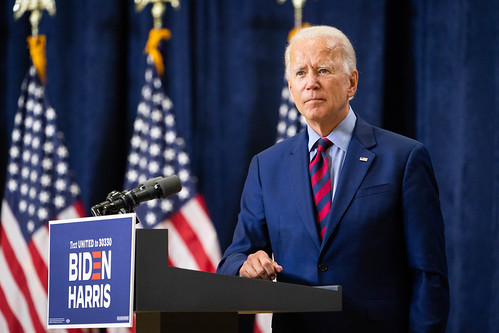 “Press Conference on the State of the US” (CC BY-NC-SA 2.0) by Biden For President

Despite these documented wins under the Trump administration, Biden is branding the current economy as “K-shaped” and stating that only the wealthy are benefactors of present economic gains.

Over the weekend, President Trump’s 2020 re-election team pushed back against this untrue assertion; additional information from Fox News also confirms that the president’s campaign held Biden to task on his own past in politics and overseeing the economy.

The Facts from the Trump 2020 Campaign

Trump communications director Tim Murtaugh held Biden’s feet to the fire and pushed back against the latter’s false economic claims.

Murtaugh explained to the nation that a “very clear choice” exists between Trump and Biden. While the president has vowed to protect various jobs and industries, Biden’s track record in politics has sabotaged Americans’ employment and shipped certain industries over to China.

On Labor Day, voters know @realDonaldTrump built the world’s best economy once and is doing it again.

The Trump 2020 communications director furthermore noted that more than 10.5 million Americans have returned to work under this president. Objectively, this disproves the Biden campaign’s narrative that middle and working-class individuals are not reaping any economic benefits.

In fact, some of the biggest job booms are happening in sectors such as retail and restaurant industries, both of which tend to employ middle and working-class Americans.

Despite the former vice president’s attacks against Trump, he cannot escape his own political past.

Biden co-sponsored and supported the 1994 crime bill that sent millions of individuals to jail. The former vice president has also gone on record promising to end fracking, raise taxes, and force Americans to hand over their firearms to the government.

This is the energy policy Joe Biden would spread from California to the entire country. https://t.co/2S8YnmFeP8

Throughout the 2020 presidential election, Biden and his allies are working overtime to divert attention from his shady history in politics, but it’s just not working. President Trump, in fact, is expected to continue holding Biden’s feet to the fire later this month when the two square off for the first presidential debate of 2020.

What do you think about the Trump campaign’s response to the Biden team? How do you think recent economic improvements will impact the 2020 presidential election? Share your thoughts with us down below in the comments section.