The 2020 presidential election is on and more intense than ever as President Trump and Joe Biden fight it out before the nation.

Right now, the president’s campaign is attacking Biden for his radical left policies and the type of leadership he’d usher into the White House. The former vice president is on record noting his support for defunding the police; Biden also happens to be working with some of the most extreme and far-left Democrats like Elizabeth Warren and Bernie Sanders. 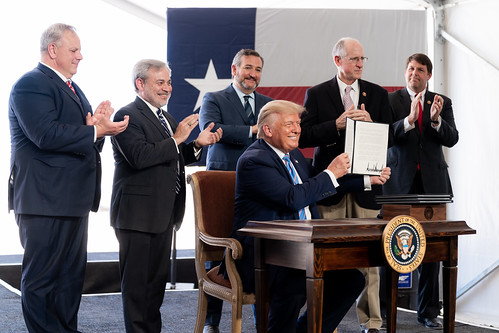 “President Trump in Texas” (Public Domain) by The White House

Meanwhile, the Biden campaign is taking shots at Trump’s response to COVID-19, claiming that the president doesn’t know what he’s doing. The former vice president furthermore maintains that Trump’s rhetoric is unpresidential and another reason why America shouldn’t re-elect him.

As of late, some Americans have noticed fewer Trump ads on-air. This is a result of the Trump 2020 team reworking its campaign strategies, according to Fox News.

What to Know About Restructured Trump Campaign Strategies

It’s natural for many Americans to wonder why the Trump campaign is choosing to rework its campaign methods. However, the president’s re-election team has issued a statement on the matter.

Ultimately, the decision to bring a new campaign manager on board led to “a review and fine-tuning” of how the Trump camp approaches the election going forward. Moreover, the president’s team vowed to “be back on the air shortly” and “forcefully” show that Biden is merely a trojan horse for the extreme far-left.

With that in mind, it is also important to note that America First, a super PAC for the president, will still be running ads for his campaign. These ads will appear on television in North Carolina, Wisconsin, Arizona, and Pennsylvania until September arrives.

A shift in campaign strategies is, in no way, a retreat or resignation, despite certain narratives from liberal media.

Focusing on the Message

In spite of the Trump campaign pausing ads, they remain alive and very much active on social media and via television.

The message of what the president has to offer versus what Biden has to offer is extremely clear. Continuing to restore the economy will occur under a second term of President Trump while an ushering in of higher taxes, low employment, and destruction of small businesses is inevitable with Biden’s policies.

This is a reality that the Trump campaign continues to vigorously and vigilantly remind Americans of, despite the shift in their leadership.

How do you think the Trump campaign’s new manager will benefit the president and his re-election chances? Let us know down below in the comments section.