Joe Biden and his allies are working to flip the state of Texas from red to blue. The Lone Star State hasn’t voted for a Democrat presidential candidate in decades; however, Democrats believe that 2020 can be the year that this all changes.
Earlier in the 2020 presidential election, Biden openly professed that he could win Texas and even campaigned in the state. The Trump campaign, on the other hand, maintained its confidence that the president will win Texas, just as he did in the 2016 race. 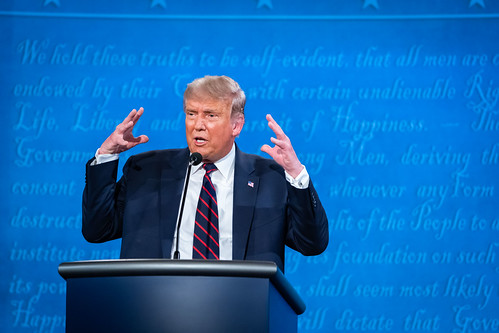 Contrary to what the mainstream media and polls which oversample Democrats would like Americans to believe, Trump support in Texas is alive and well. As a matter of fact, Texans threw a massive parade over the weekend in honor and celebration of the president, per Breitbart News.

A Closer Look at the Pro-Trump Parade in Texas

There was a big Trump car & Truck Parade today in Watauga/Richland Hills Texas !!! It was so great to see so many people together in support of Trump2020 ❤💙❤💙 pic.twitter.com/Hnc6tL43pf

Elva Camacho, the event’s speaker and a candidate for Texas’ Forth Worth District 90, spoke clearly about the importance of re-electing Trump.
Camacho explained that the country is presently “in a fight for our freedom” along with morality and the U.S. way. Before reciting the Constitution’s preamble, Camacho talked about the extent to which government has overstepped its bounds.
These statements arrive at a time when local and state governments across the nation are striving to force their citizens to wear masks and even entertaining the notion of mandating the COVID-19 vaccine once it arrives; all of this comes on top of the many businesses that are struggling thanks to lockdowns.

Support in Fort Worth

Open demonstrations in favor of the president were not mutually exclusive to North Richland Hills over the weekend.
https://twitter.com/KC18316297/status/1320480790900314113
Trump supporters furthermore took it upon themselves to gather in Fort Worth. Images online surfaced, with attendees wearing Trump attire, carrying American flags, and looking happy to be where they were.
As pro-Trump demonstrations break out across the nation, his supporters are noting the massive differences in enthusiasm for the candidacy of Trump, as opposed to that of Joe Biden.
What did you think about the pro-Trump demonstrations in Texas over the weekend? Do you believe the president will win the state again in this election? Be sure to let us know in the comments section below!