Earlier this month, Texas Governor Greg Abbott (R) mandated face masks throughout the state. Abbott’s mandate arrived after previously holding back on requiring face coverings; however, this all changed when reports of surging COVID-19 cases arrived last month.
Since the Republican governor’s decision to issue such a mandate, he has faced massive backlash from conservatives and others who take issue with forced masking. Some people are accusing the governor of weak leadership; others maintain that Abbott is contributing to a dangerous, slippery slope that paves the way for additional, tyrannical mandates. 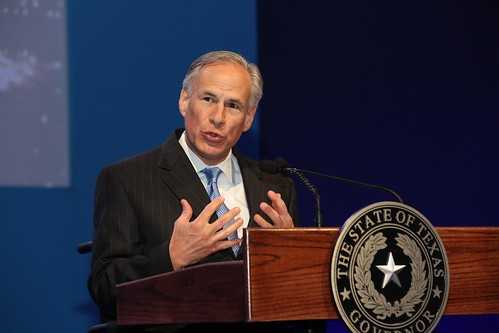 Now, breaking reports from Fox News confirm that an increasing number of Texas police sheriffs are not on board with Abbott’s mask mandate. Therefore, they are refusing to uphold or enforce requirements for Texans to “mask up.”

Sheriffs in the Texas counties of Panola, Nacogdoches, Houston, Gregg, Upshur, Gillespie, Kerr, Montgomery, and Denton will not take action against individuals who decline to wear face coverings. The law enforcement leaders have branded Abbott’s mandate as “draconian,” while also claiming that the wording of the Texas governor’s executive order is unclear.

Wearing a face covering in public is proven to be one of the most effective ways to slow the spread of #COVID19 while continuing to keep Texas businesses open.

Texans should wear a face covering for the health of their families, friends, and for all fellow Texans. pic.twitter.com/5oWVfZMsph

Following a verbal or written warning, Texas residents who decline to wear face coverings are liable to $250 fines. However, they cannot face arrest or jail time. Put simply, many Texas sheriffs do not believe that enforcing Abbott’s mandate is worth the time or energy.
Law enforcement leaders in Texas also maintain that upholding face mask requirements would only further strain the relationship between law enforcement and community members. The Denton County Sheriff additionally pointed out that Governor Abbott’s mandate is not a law, hence rendering it as “unenforceable.”

News of multiple Texas sheriffs refusing to enforce the governor’s mask mandate arrives amid lawsuits against Abbott. Some Texans believe that forced face masking is a violation of civil liberties and constitutional rights; others are of the belief that the government doesn’t have the right to force people to wear masks.

Thanks for caving!
I will not wear a mask because of my 2A!! It is illegal for me to carry and wear a mask! Period!

Another complaint with face masks mandates deals with the Second Amendment. Critics of the Texas governor maintain that having to wear a mask infringes upon their right to bear arms, seeing as individuals who are carrying are not supposed to conceal their faces.
All in all, it is very safe to say that Governor Abbott’s face mask mandate has failed to garner widespread support from the general public.
What do you think about the nine sheriffs who refuse to uphold the Texas governor’s face mask mandate? Do you think other law enforcement leaders should follow suit? Let us know down below in the comments section.