As the 2020 presidential election heats up, President Trump is venturing back out into the nation with his in-person campaign rallies.
The president’s decision to re-engage with supporters in real-time has prompted criticism from Democrats and others. 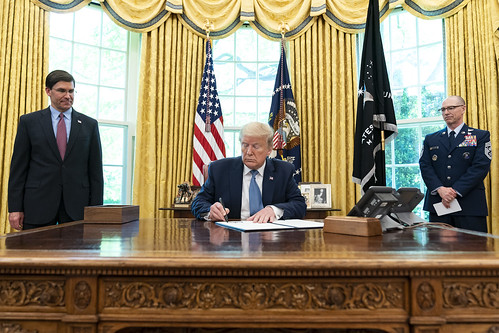 Those who oppose the president argue that his rallies are putting people in harm’s way of contracting coronavirus; however, many of Trump’s detractors have adopted a permissive attitude towards Black Lives Matter rallies and other gatherings with a politically left slant.
According to Fox News, the president’s next in-person rally will occur on July 11 in New Hampshire and outdoors. Reports have indicated that coronavirus transmission is less likely when gatherings occur outside as opposed to inside.

A Closer Look at the Upcoming New Hampshire Rally

Trump’s rally will take place this Saturday at the Portsmouth International Airport.
During this time, attendees will be given face masks and access to hand sanitizer; although face masking shall remain optional at the rally, a spokesperson from the president’s campaign stated that Trump supporters who attend are “strongly encouraged” to wear the masks given to them.
https://twitter.com/TeamTrump/status/1279868608081002496
Hogan Gidley, the national campaign press secretary for Trump 2020, stated that the president and his team are excited about the rally. Gidley also added that the Trump team looks forward to “freedom-loving patriots” gathering in celebration of America’s greatness.
The New Hampshire rally will mark the second in-person Trump rally since the nation’s reopening following COVID-19 shutdowns.

Rallies and in-person gatherings significantly contributed to the president’s success in winning the 2016 presidential election; therefore, many Americans are in agreement that Trump getting out and about is a pivotal strategy to him winning a second term in the White House.
Some political analysts have speculated that a second shutdown could greatly sabotage Trump’s chances of winning re-election and defeating Joe Biden. This is, in part, due to the economy being a strong foothold of the president’s political resume.

Others maintain that Democrats are aware of how rallies and a strong economy will help Trump, hence their opposition to Trump’s in-person gatherings and the reopening of America. Backers of the president have accused Democrats of holding double standards when it comes to supporting or opposing large gatherings in the country.
Do you think President Trump’s New Hampshire rally will help him in the state? Share your thoughts with us in the comments section below!