In the wake of leftist calls to defund the police, conservatives are actively working to ensure law enforcement knows that many Americans support them.

Over the past few weeks, reports of “blue flu” or police officers quitting their jobs across the nation have increased. Morale across law enforcement is down big time; the fact that some Democrat mayors are actually defunding their city police departments has not helped matters either. 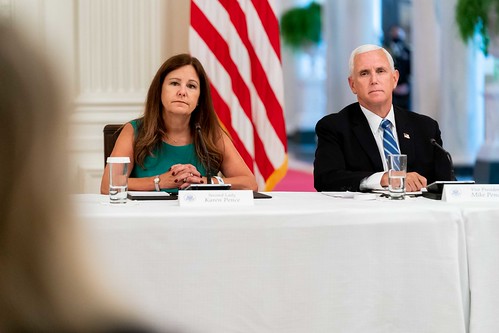 During the vice president’s time in the Keystone State, he affirmed that police officers across the nation are “the best” in America. Pence also confirmed that our nation will never defund our police department now or ever.

VP @Mike_Pence: "Just yesterday, Joe Biden said that well-armed police in his words 'become the enemy.' And he said that he would 'absolutely' cut funding for law enforcement."

"I want you to hear this directly from me… we're not going to #DefundThePolice. Not now, not ever!" pic.twitter.com/RVbfZhR2zO

Another key point in the vice president’s speech dealt with the relationship between police officers and the communities they serve.

Pence explained that the idea of having to choose between support for law enforcement and support for communities is a false dichotomy. The two are not mutually exclusive; it is possible to support police officers and the communities they protect and serve.

While speaking with police officers in Pennsylvania, the former vice president also tore into anti-police rhetoric from Joe Biden. Pence noted Biden’s support for reducing funding to police departments, in addition to Biden labeling members of law enforcement as “the enemy.”

President @realDonaldTrump & this Administration are listening, learning & leading. Yesterday, Joe Biden referred to the police at “the enemy” & called for them to be defunded. We want all officers to hear us loud & clear: we are NOT going to defund the police—not now, not ever.

Ultimately, the vice president stated that Biden’s stance on policing would endanger the nation as a whole. Remarks from Pence also mirror criticisms from other conservatives, especially in the wake of the left’s widespread push to do away with law enforcement in society.

At this time, Biden continues to face blame for not only his remarks on police, but also for his overall policies. Many Americans believe that Biden is shifting to the left; the former vice president’s shift can be attributed to the need to attract both progressive and moderate Democrats.

Furthermore, Biden’s remarks about law enforcement arrive as certain communities are already slashing funding to police departments; in a tragic sense of irony, many of these communities are those that need policing the most.

What do you think about Mike Pence’s speech to law enforcement members yesterday? Let us know in the comments section below!