Talk about a national mandate for Americans to wear face coverings has repeatedly come up.
For quite some time, both Joe Biden and Kamala Harris vowed that such a mandate would arrive under a Biden administration; however, the former vice president later shifted gears, admitting that the U.S. Constitution doesn’t allow a president to command an entire nation to cover their faces with masks. 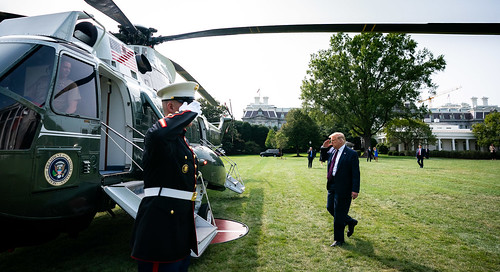 Unlike Biden, President Trump has remained consistently against the idea of a nationwide mask mandate; however, the matter arose on Tuesday evening during President Trump’s participation in an ABC News town hall, according to Breitbart News.

Yesterday, the 45th president sat down for a socially-distanced town hall event with ABC News host George Stephanopoulos. During this time, Trump covered a variety of subject matters from policy, to how presidential he is, running against Joe Biden, and more.
During part of the town hall, attendees were given the opportunity to ask direct questions of the president; this is when the talk about a nationwide mask mandate arrived. The attendee asked President Trump why he doesn’t support a nationwide mask mandate, thus prompting a very direct response.

Uncommitted voter asks Pres. Trump in a special @ABC2020 event: "Why don’t you support a mandate for national mask wearing? And why don’t you wear a mask more often?" https://t.co/eE0UNurElz pic.twitter.com/6u5n4Riepy

Trump explained that there are many Americans who take issue with mask-wearing, especially when it comes at the behest of government mandates. Likewise, the president informed town hall viewers that mask-wearing can increase the likelihood of consistently touching or picking at one’s face.
Trump has repeatedly maintained that he will not implement a federal mask mandate.

Some very interesting and impactful events are set to happen before October rolls around.
Later this month, Biden will participate in his own town hall, hosted by CNN, of course. The former vice president is furthermore set to debate President Trump on Tuesday, September 29.
https://twitter.com/TeamTrump/status/1306042840548610048
Whether or not Biden actually shows up to the debate is something that Americans have different theories on. Some have suggested that the Democrat nominee will weasel out of a one-on-one against Trump as a means of saving face; others believe that Biden will try to debate Trump virtually, something that the president’s campaign is trying to prevent.
The Trump re-election team has repeatedly stated that Biden should commit to showing up in person to debate the president; this means not employing any shortcuts or backdoor attempts to get out of the debates.
What did you think about President Trump’s talk about face masks and a nationwide mask mandate? Let us know where you stand down below in the comments section.