Multiple polls have asserted that Joe Biden is leading President Trump in the 2020 election race. These polls show the former vice president ahead in states like Texas, Michigan, and other areas across the nation.

Democrats and the mainstream media furthermore make a point of plastering these polls across headlines and airwaves. In many cases, reporters claim, whether directly or indirectly, that the aforementioned surveys are indicative of November’s outcome. 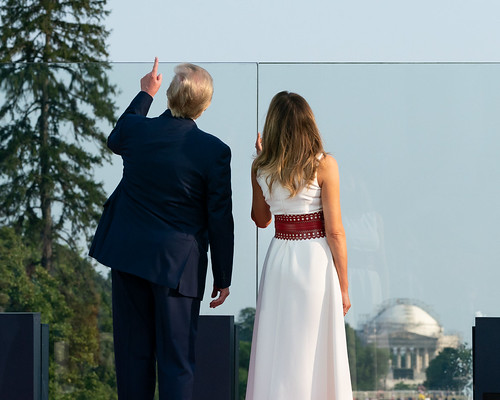 “Salute to America 2020” (Public Domain) by The White House

However, new reports from Breitbart News confirm that this simply isn’t so. As a matter of fact, many of the previously-mentioned polls are intentionally slanted to the left.

This happens when surveys include notably more feedback from Democrats than Republicans, rather than splitting feedback 50/50 or 33/33/33 when including Independents.

The Plot to Erase the Voices of Trump Supporters

During a sitdown with Breitbart News, Trump 2020 communications director Tim Murtaugh explained that national pollsters have a vested interest in “suppressing” the excitement of Americans who will vote for Trump.

Murtaugh also noted that multiple national polls have under-surveyed Republicans while getting more feedback from Democrats. This, of course, will undoubtedly skew the polls in a left-leaning direction. The Trump communications director then noted that, unlike Joe Biden, the president has very eager and enthusiastic supporters.

Question of the day for Biden

In the last 100 days you’ve embraced policies to crush local police, wipe out borders, give the entire economy to enviro-extremists & raise taxes by trillions.

Over the next 100 days what other radical leftist ideas will you be forced to adopt?

Further expanding upon this point, Murtaugh stated that Trump’s supporters will “run through a brick wall” to cast a vote for him, whereas Biden supporters wouldn’t do the same.

In fact, many polls have indicated that of Biden’s backers, most of them are motivated by dislike for Trump, rather than eager support for the former vice president.

Will the Plot Succeed?

Many times, supporters of President Trump are referred to as the silent majority. This means that while polls may not indicate widespread support for Trump, this doesn’t mean that such support is nonexistent.

In 2020 alone, the president has managed to excite voters enough for them to show up days ahead of time to an arena for a planned Trump rally. Meanwhile, Biden struggles to fill rooms or even get a sizable viewership on his campaign livestreams.

President @realDonaldTrump: We are LOWERING the price of insulin and EpiPens pic.twitter.com/TYXutrViHQ

During the 2016 presidential election, the polls also showed Hillary Clinton beating Trump, yet she is not president. In many ways, 2020 appears to be a repeat of 2016, with Biden in the same position that Clinton held in 2016.

Do you think national pollsters are intentionally silencing Trump supporters’ voices by surveying more Democrats than Republicans? Let us know down below in the comments section.