Violence and destruction have terrorized the streets of Minneapolis, Minnesota for weeks now.

On the frontlines of it all have been police officers. Following the death of George Floyd, unspeakable violence broke out on the streets of Minneapolis. Violent rioters set fire to police precincts, while looting countless businesses, destroying their own communities, and quite literally burning the city to the ground. 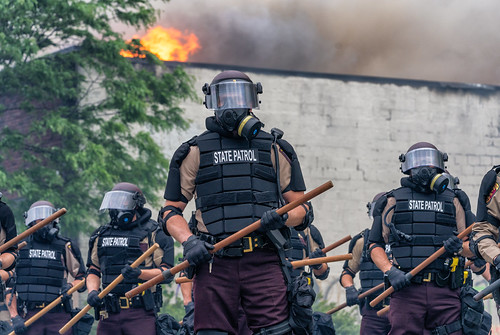 Earlier this month, Minnesota Governor Tim Walz requested a federal bailout, but to no avail. Now, more than 150 Minneapolis police officers are filing disability claims in the wake of exposure to unheard-of onslaughts, confirms Breitbart News.

Many police officers in Minneapolis are experiencing post-traumatic stress disorder (PTSD) as a result of ongoing exposure to the aforementioned violence. To make matters even worse, however, crime is surging in the city and certain local leaders are mulling over the possibility of defunding the police department.

None of this spells good news for the men and women tasked with protecting and serving Minneapolis. Therefore, more than 150 local police officers are filing disability claims; many have left the police force following the outbreaks of uncontrolled riots, notably the burning down of a Minneapolis police precinct.

That’s possible because of a process cemented in state law.

If state lawmakers are serious about police reform, they’ll use this session to tackle arbitrators’ power to overturn police chiefs’ decisions when it comes to proven egregious misconduct. #mnleg

According to an attorney, many of the city’s law enforcement officers have reached a “breaking point.” In addition to PTSD, Minneapolis police officers are additionally struggling with higher divorce rates, alcohol abuse, and lower morale in their personal lives.

The Dangers of Vilifying and Defunding Police

As various groups and leaders pile on and make moves against law enforcement officers across the nation, the dangerous aftereffects are growing. Minneapolis police officers are not the only ones in the country who are deciding that enough is enough.

Reports of officers walking off the job in Atlanta surfaced weeks ago; a similar story holds true for different police departments in Kentucky that are seeing more and more officers quit the job.

HF72 gives us a good jumping off point for reforming police arbitration by reexamining selection of arbitrators. But more importantly, we need legislation that allows police chiefs to terminate officers who engage in gross misconduct w/o being overturned by an arbitrator at all. https://t.co/akNSPOODGl

Many police officers are deciding that the job of policing communities that abhor them is simply not worth it. Many families and children of police officers across the country also have concerns about whether or not their loved ones will make it home safely.

These are natural consequences when police officers are made to feel as though they cannot do their jobs.

What do you think about the Minneapolis police officers who are seeking disability? Sound off down below in the comments section.