In recent weeks, President Trump’s support for our nation’s veterans and military has come under attack from the radical left.

Earlier this month, The Atlantic published an untrue story that accused the president of mocking wounded and deceased servicemembers. Trump immediately came out against this story with denials, as did multiple people who know and work with him. 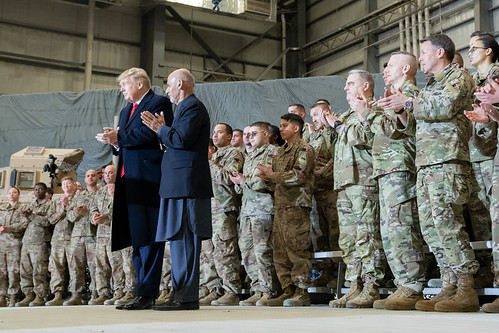 Even individuals who are not in the president’s fan club, such as John Bolton, came out against the lies that The Atlantic pushed into the mainstream. Despite the left’s best efforts, the president’s positive relationship with the country’s military and veterans remains very much intact.

As a matter of fact, hundreds of military families have recently signed a letter to demonstrate their support for the 45th president, confirms Breitbart News.

A Closer Look at the Military’s Support for President Trump

In merely three days, the letter affirming backing for the president garnered more than 700 signatures.

Within the content of the letter is the admission that a plethora of military spouses are part of the “silent majority” that backs Trump. The military community also speaks out against “lies and rumors” being spread about Trump before affirming that they do, in fact, “stand tall with [President Trump].”

President @realDonaldTrump rips the phony 'The Atlantic' story: There’s nobody that loves our military more than me pic.twitter.com/io8tjve3l1

This fairly new letter from the military community arrives after leftist groups drew attention to members of the military who appear to be anti-Trump.

The Democrat Party’s eagerness to shine a spotlight on this arrived around the time that The Atlantic’s untrue story about the president began to circulate across national news.

The Silent Majority in 2020

Similarly to the 2016 presidential election, the silent majority will play a huge role in this year’s election outcome.

There are already signs indicating this; whenever President Trump travels across the nation to host rallies, he attracts massive, enthusiastic crowds. It also hasn’t been unheard of for Trump supporters to camp outside of venues where the president is set to speak days in advance.

Biden, on the other hand, has yet to elicit an iota of enthusiasm from his supporters to rival what President Trump has. Many of the polls asserting the former vice president in the lead now also claimed that Hillary Clinton was all but guaranteed to win the 2016 presidential election.

What do you think about the military’s support letter to President Trump? Are you part of the silent majority? Chime in down below in the comments section.