Conversations about defunding the police remain alive and well in the United States.
Black Lives Matter and other left-wing activists have continued to assert that police officers are systemically racist towards people of color. However, critics of this narrative routinely point out that facts don’t support this claim.
The reality is that more white Americans die at the hands of police than black Americans. Moreover, black-on-black crime outweighs police “brutality” towards black people many times over. These are data-backed facts; nevertheless, the left remains steadfast in its crusade to demonize police. 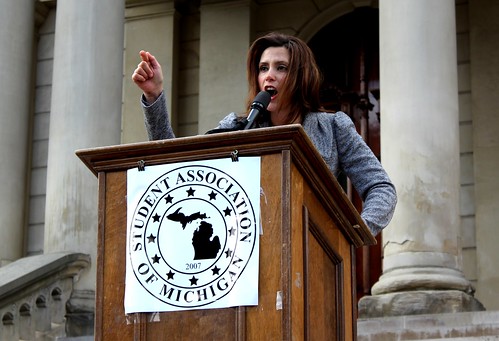 Democrat leaders are strongly behind the movement to defund the police. Certain leftist mayors across the nation have actually reduced funding to their own local police departments; now, Michigan Governor Gretchen Whitmer has defunded over $115 million dollars from Michigan State Police, confirms Breitbart News.

What to Know About the Defunding of Michigan State Police

The $115 million reduction from the Michigan State Police serves as nearly 25% of funding for the agency.
Michigan’s Departments of Health & Human Services and Department of Corrections also underwent significant budget cuts. At this time, it’s being reported that Whitmer made these steep reductions in order to settle Michigan’s budget shortfall of $2.2 billion dollars.

The Michigan governor’s slashing of funding for Michigan State Police also comes at an interesting time. Just last month, Whitmer defended the Defund the Police movement, stating that she understands where proponents of this campaign are coming from.
Furthermore, the governor of Michigan opined that police departments “don’t need all the money” they currently receive.

Many Americans are anticipating that significant crime increases will follow Whitmer’s decision to slash nearly 25% of Michigan State Police’s budget. Those who oppose defunding the police have also warned that communities most in need of law enforcement will become most vulnerable.
Governor Whitmer has not shared very many remarks about her decision to defund the police in Michigan. Instead, her social media accounts are full of praise for governors who have issued forced masking orders.

Today, President Trump threatened to send federal law enforcement into many cities, including Detroit. Frankly, he doesn't know the first thing about Detroit. If he did, he’d know Detroiters gathered to peacefully protest the systemic racism that Black Americans face every day.

Likewise, Whitmer is urging President Trump to sign a national mask mandate into effect for all Americans. However, this is something that the president maintains he will not do, citing the need for people to have “a certain freedom.”
What do you think about the Michigan governor’s decision to defund the police? Which communities do you think will suffer the most from this decision? Let us know down below in the comments section.