As the 2020 congressional elections play out, Republicans in the House of Representatives are prepared, in the event that they regain majority control of the body.

Right now, however, Democrats maintain control of the House; to say that the GOP House members are displeased with their liberal colleagues’ manners of conducting themselves is a vast understatement. 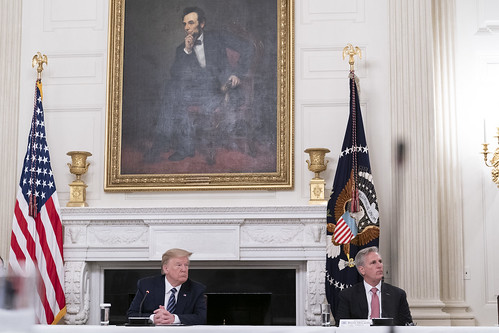 This is why House Minority Leader Kevin McCarthy (R) and others are preparing for a win this fall. If Republicans do manage to take the House back from Democrats, there are a series of endeavors that the GOP shall embark upon.

According to Breitbart News, the House Minority Leader shared what Republicans have in mind for the House if they regain a net amount of 17 seats.

A Closer Review of House Republicans’ Plans for Majority Control

Per the House Minority Leader, the GOP’s “vision for the future” entails a series of proposals and focuses that House Republicans will zone in on, assuming they reacquire control of the body.

These proposals and focuses deal with taking on coronavirus, safely re-engaging the nation’s economy, and “renewing” the American Dream. Of course, each of these areas also come with subcategories that GOP House members will focus upon.

Democrats running Congress are having a lot of technical difficulties.

Democrats running the country would be even worse. pic.twitter.com/TwBEpqM53K

Taking on COVID-19 will involve shielding communities, both health-wise and from economic devastation. Likewise, renewing the American Dream entails the protection of individual freedoms and liberties, expansion of 5G access, more training in the workforce, and the empowerment of school choice.

A safe re-engagement of the nation’s economy is also deeply important to Republicans, as well. This renewal shall involve a series of measures; some of these measures include restoring the American supply chain and fixing U.S. bridges and roads.

Republicans, both in the House and Senate, continue to speak out against the goals of their Democrat colleagues. At this time, both Republicans and Democrats remained deadlocked on agreements for coronavirus stimulus aid; in fact, the impasse is so deep that President Trump has indicated that he might intervene if a solution fails to arrive.

How much longer will Democrat leaders keep their heads buried in the sand? pic.twitter.com/XZyZVy0rWN

Right now, GOP congressional members maintain that Democrats are hurting the nation and the nation’s economy. The left continues to take heat for calling to defund the police; Democrats’ support for policies that would cripple small businesses also isn’t doing them any favors.

Do you hope Republicans will regain control of the House of Representatives this fall? What do you think about the GOP’s “vision for the future?” Let us know down below in the comments section!