During Nancy Pelosi’s stint as House Speaker, she’s engaged in several behaviors that congressional Republicans have vehemently opposed. The attempt to impeach President Trump is one example; House Minority Leader Kevin McCarthy famously branded the stunt as the “weakest” and “thinnest” impeachment in history.

Earlier this year, the Democrat speaker also ripped up her copy of President Trump’s State of the Union address. Now, the latest great issue of contention deals with the future of the Supreme Court. 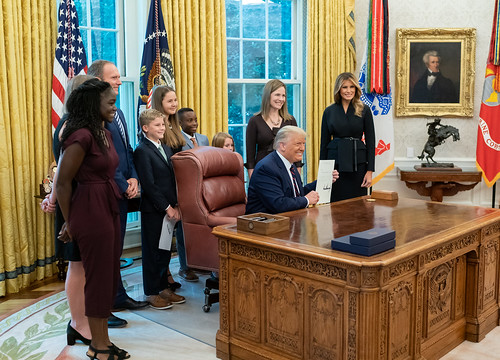 When directly asked about whether Democrats will impeach Trump or U.S. Attorney General William Barr to block proceedings to fill the vacant SCOTUS seat, Pelosi professed that Democrats have “arrows in [their] quiver.”

It turns out that Democrats aren’t the only ones; House Republicans apparently have arrows in their quiver also because Georgia Rep. Doug Collins has put forth a resolution to remove Pelosi from the position of House Speaker, confirms Fox News.

The Resolution to Remove Pelosi’s Speakership

The Republican congressman did not mince words when providing an explanation for his resolution. Collins stated very plainly that Pelosi lacks the “mental fitness” to effectively carry out her duties as House Speaker.

The Georgia representative then declared that the House Speaker’s “recent actions” show that she’s not willing to adhere to the Constitution.

It's clear that Nancy Pelosi does not have the mental fitness to serve as Speaker of the House of Representatives.

I'm introducing a resolution to push for her removal.

In an excerpt from Collins’ resolution, Pelosi is held to task for consistently pursuing “baseless and fruitless investigations” into the president and Trump administration. One investigation included the infamous and unsuccessful impeachment sham that started last year.

While the Georgia Republican is the first to put forth an official resolution to remove Pelosi as House Speaker, he’s not the only one who has considered this. Last month, Leader McCarthy warned that if Pelosi attempts impeachment to block SCOTUS proceedings, Republicans would move to remove her speakership.

Collins and McCarthy are far from the House Speaker’s only critics. In fact, since COVID-19, Pelosi has taken heat from many Republicans for her manner of negotiations and refusals to work across the aisle with the GOP.

Tune in as @RepRaskin and I discuss the introduction of the Commission on Presidential Capacity to Discharge the Powers and Duties of Office Act. https://t.co/JuKDQg6Hqw

Just earlier this month, Pelosi made a very telling remark about airline workers who were recently furloughed. The House Speaker professed that if Democrats rush to provide financial aid to airlines (without that being part of a large package), they’ll lose “leverage” to get other things they want, such as bailouts for Democrat-run states ruined by ongoing shutdowns.

Only time will determine what becomes of Rep. Collins’ legislation to remove Pelosi as Speaker of the House.

Do you think Nancy Pelosi should lose her speakership as a result of her behavior? Let us know your opinions in the comments section down below!