Officials in Georgia continue to clash with one another as certain mayors attempt to enact policies that are stricter than the executive order of Governor Brian Kemp (R).

Last week, Kemp signed an executive order for the state’s response to COVID-19; in this order, cities and local governments are banned from issuing orders that are more austere than his own. Many local mayors don’t like this and are accusing the governor of failing to save lives. 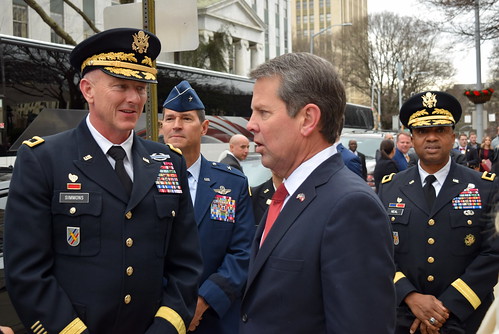 “Commander in Chief” (CC BY 2.0) by Georgia National Guard

Amid the onslaughts, the Georgia governor is fighting back according to Breitbart News. Not only is Kemp suing Atlanta Mayor Keisha Bottoms for attempting to roll back the city to phase one and mandate masks, but Kemp is also responding to pushback from other mayors.

Pandemic Politics in the Peach State

During an interview with Fox News host Laura Ingraham, the Georgia governor explained that certain mayors in the state are consumed with “pandemic politics.” This regards not only unenforceable mask mandates, but also mayors’ interests in restoring shelter-in-place orders.

Kemp continued, stating that “pulling the rug out from under people” is not something he will allow to happen. The Georgia governor then reiterated his commitment to protecting lives and livelihoods before noting that certain already-existing laws aren’t being enforced.

For the next four weeks, I’m asking Georgians to do these four things to help us flatten the curve again:

Finally, Kemp zinged mayors for striving to “undermine” the return of Georgia’s economy. Some examples of this include rallying to keep schools closed, calling to roll back reopening plans to phase one, etc.

Kemp again chalked this up to “pandemic politics” before noting his work with various educational and health leaders to safely reopen Georgia.

During a press conference, the Georgia governor also reminded state residents of personal responsibility. In response to a question regarding mask mandates, Kemp explained that government will not be the solution to each and every problem.

This assessment from Kemp aligns with that of President Trump and Vice President Mike Pence; both leaders have spoken out against left-wing calls for a national face mask mandate.

NEW: "I want people to have a certain freedom."
President Trump says he would not issue a national mandate requiring masks to be worn at all times. #FoxNewsSunday pic.twitter.com/kIvOCTUwyC

The intensity of pandemic politics has surged over the past few months, especially amid mask mandates and pushback against them. Currently, the idea of opposing sides reaching a resolution appears next to impossible.

What do you think about the Georgia governor’s response to criticism? Are Democrats playing pandemic politics in response to COVID-19? Let us know down below in the comments section.