Florida is turning out to be a significant battleground state in this year’s presidential election.
Both the Trump and Biden campaigns are working extensively to win over Florida; however, current events seem to indicate that the president is on his way to victory in the Sunshine State. Republican early-voters outweigh Democrat early-voters in Florida; furthermore, a poll from Trafalgar Group shows the president beating Biden by multiple points. 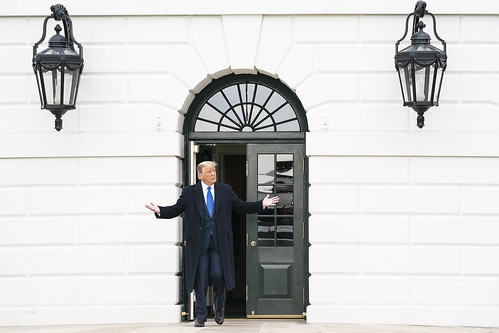 The Biden campaign has sent Barack Obama and Kamala Harris to Florida multiple times; even Biden himself visited the Sunshine State in the attempt to win electoral votes.
However, the Trump campaign is also working hard in Florida. Last week, Trump held several rallies in Florida and even voted early in the state. Yesterday, first daughter Ivanka Trump traveled to the Sunshine State for a rally that engendered massive turnout, as documented by Breitbart News.

The first daughter traveled to the Sunshine State’s West Coast in order to speak with her father’s supporters.
Images and videos of the crowd waiting to hear the first daughter speak quickly made their way online. In keeping with other pro-Trump events, supporters in Florida carried Trump signs, American flags, and other related signage. Likewise, Trump supporters wore lots of red, white, and blue along with Trump apparel.

The first daughter’s speech went off without a hitch. She spoke about the danger of cancel culture, the importance of school choice, and a litany of other relevant matters that impact the American people.
Before leaving Florida, Trump also swung by a Miami-based school where she spoke with various students.

As of today, there are exactly six days left of the 2020 presidential election.
Today, Ivanka Trump will spend time campaigning in Pennsylvania and North Carolina. Each of these states is believed to be critical in this year’s presidential race.

Great visit to SLAM Miami where I met so many incredible students.  Each of them are exceptional. SLAM (and @pitbull) are giving them the opportunity to pursue their dreams and change the world! pic.twitter.com/NbHa9toRyc

Democrats have campaigned extensively in these areas, with the Biden team bringing in Obama to campaign on his former running mate’s behalf. Ironically, Obama’s time in Philadelphia arrived days before the city descended into riots; unrest continues to grip Philadelphia following the police shooting of a black man who charged at officers with a knife.
Do you think President Trump will secure electoral votes in Florida? What do you think the final six days of campaigning will result in? Let us know down below in the comments section.