Over one year ago, former Trump attorney Michael Cohen went to prison for campaign finance violations, tax fraud, and other crimes.

Following Cohen’s fall from grace, he made a series of wild and graphic accusations against the president. The former Trump lawyer also testified before Congress, alleging that the president coerced him into breaking campaign finance laws. Trump, of course, denied these allegations. 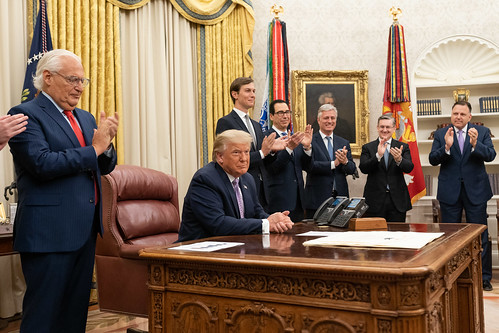 Now, as the nation is nearly eight and a half months into 2020, Michael Cohen is back. This time, he’s got a tell-all book about the president which is set to hit bookshelves next month, according to reports from Fox News.

Everything to Know About Cohen’s Upcoming Tell-All Book

Titled “Disloyal, A Memoir: The True Story of the Former Personal Attorney to President Donald J. Trump,” Cohen makes a series of eyebrow-raising claims about the 45th president.

In his tell-all, the former Trump attorney maintains that the president either “[wanted] him dead” or ” wouldn’t mind if [he were] dead.” Cohen additionally accuses the president of speaking “like a mob boss” and indirectly making statements and orders. Additional claims assert that Cohen faced death threats from Trump supporters after working with Robert Mueller.

The day has finally arrived. I have waited a long time to share my truth. To read the foreword and pre-order my book DISLOYAL, visit https://t.co/Va4Rt0Zear

Throughout the released excerpts of the book, the former Trump lawyer also works very hard to present himself as credible. In his memoir, Cohen professes to have spent more than ten years within the orbit of the president’s “innermost circle.”

Ultimately, however, Cohen tells readers that his upcoming memoir is him seeking to “reintroduce” himself to the American people.

How is the Nation Reacting?

The president’s critics and foes have descended upon the various claims Cohen makes in his forthcoming memoir. Various quotes within the former Trump attorney’s book are already being rapidly shared and spread across different social media platforms.

Other Americans are taking a more cautious and even skeptical approach towards Cohen’s upcoming tell-all. Despite the sensational nature of the claims, not everyone believes what the former Trump attorney is alleging. Some have even suggested that Cohen’s memoir is about spite towards the president, rather than a shot at “redemption” and “reintroduction.”

As the nation reacts, Cohen is continuing to promote his book and encourage Americans to pre-order online.

What do you think of Michael Cohen’s upcoming tell-all memoir about his relationship with President Trump? Don’t hold anything back in the comments section below!