Proposed mitigation strategies and relief efforts for coronavirus have greatly highlighted the partisan divides that exist between the GOP and the Democrat Party.
Earlier this week, congressional Republicans presented legislation that would have helped Americans in a variety of ways. These ways include, but are not mutually exclusive to, the following: enriching the Payment Protection Program, giving relief to still-jobless Americans, and furthering access to coronavirus testing. 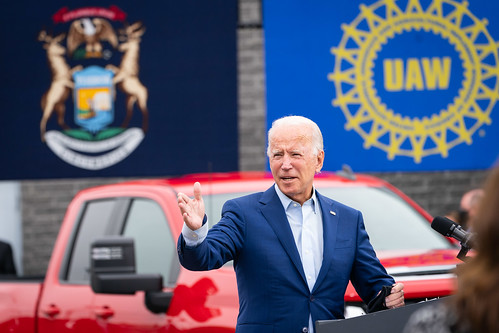 “Made In America Policy Speech at United” (CC BY-NC-SA 2.0) by Biden For President

Unfortunately for the American people, Democrats in Congress shot down this legislation. As many Americans are left scratching their heads and wondering why, House Minority Leader Kevin McCarthy (R) has an explanation, according to Fox News.

The Truth about the Congressional COVID-19 Relief Impasse

On Thursday, Leader McCarthy joined Fox News’ Laura Ingraham for an interview. Throughout this period, the GOP congressman explained the true motivation for Democrats’ rejection of the Republicans’ COVID-19 relief bill.
McCarthy told Ingraham and Fox News viewers that the Democrats seek to “inflict pain” on Americans, rather than contribute to the return of the economy under Trump. The California Republican then went on to note that Democrats are threatened by the success of the president for political reasons.

During his interview, the House Minority Leader also reminded the nation of Biden’s promise to shut down the nation again; this is something that the former vice president has since attempted to walk back, but many Americans have still concerns.
Finally, Leader McCarthy pointed out the hypocrisy of Democrats failing to adhere to the COVID-19 restrictions that they set for others. Some examples include House Speaker Nancy Pelosi getting her hair done at a closed-to-the-public salon without wearing a mask.
McCarthy then remarked that the governors of Michigan and Illinois have both been caught breaking their own coronavirus rules.

Democrats on COVID-19 Relief and More

Democrats have yet to respond to the multiple instances of them flouting or disregarding the mitigation measures they demand the nation to follow; however, they have given a list of reasons for refusing the GOP’s coronavirus relief bill.

The cynical Republican COVID bill was emaciated, inadequate, and designed to fail.

Americans need help now, and Congress needs to respond in a way that meets the nation’s very real and urgent needs.

Earlier this week, Senate Minority Leader Chuck Schumer stated that the GOP relief bill was full of “poison pills.”
Schumer and other Democrats accused Republicans of stinginess on necessary funding for various sectors. The GOP, however, maintains that Democrats are playing politics with Americans’ lives and livelihoods.
This is far from the first time that Republicans and Democrats have butted heads on COVID-19 relief legislation.
Do you think Democrats are intentionally hurting Americans in a political war against President Trump? Will Congress be able to agree on a new COVID-19 relief package for the nation? Share your thoughts in the comments section below!