The Democrat Party has significantly shifted from where it was even five years ago. Since President Trump won the 2016 presidential election, the left-wing has grown considerably more extreme. Many Americans are attributing this shift to Democrats’ interest in being as polar opposite to the president as possible.

The Democrat Party’s collective move to the radical left leaves true moderate leftists and others with similar political leanings in a tough spot. This explains why, over the past few years, some moderate Democrats have joined the Republican Party, stating that the Democrat Party no longer supports their values. 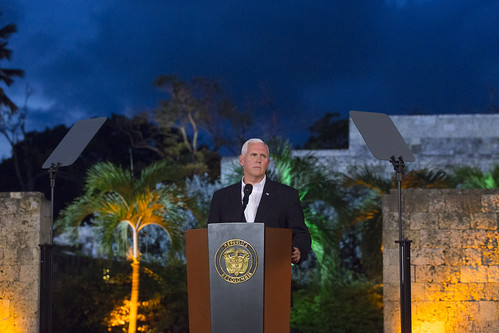 Yesterday, President Trump sent a message to moderate Democrats who may feel as though their party no longer represents what they stand for. While campaigning in Michigan, the 45th president encouraged Democrats to join him and the Republican Party, according to Breitbart News.

A Closer Look at President Trump’s Invitation to Moderate Democrats

The president’s extended invitation to Democrats arrived when he rallied with supporters in Muskegon, Michigan on October 17. While speaking, Trump warned that electing Biden into office would lead to more widespread crime that Americans have seen in cities like NYC, Kenosha, and Portland.

Likewise, the president maintains that Biden made a deal with the devil in order to become the Democrat Party’s nominee. As such, the former vice president is now beholden to the forces of the socialist and extreme left-wing, according to President Trump.

President @realDonaldTrump: This election is a choice between a strong Trump recovery and a Biden depression pic.twitter.com/zJezCKAM93

Moreover, Trump professed that any “moderate Democrat or liberal” has a “moral duty” to put an end to the insanity that has infected the Democrat Party. Not long after this point came Trump’s invitation for the moderate Democrats and liberals to join the GOP and “the party of Abraham Lincoln.”

More on the Trump Rally in Muskegon

While campaigning with Michigan supporters, the president also talked about matters aside from Joe Biden.

The importance of law enforcement, the 1776 Commission, and the dangers of cancel culture were just a few points that Trump touched upon in Muskegon. Folks who attended the rally were also given the opportunity to hear the president’s thoughts on U.S. patriotism, the importance of a fair election, etc.

President @realDonaldTrump: If you are a moderate Democrat or liberal who knows how far your party has gone, you must join the Republican Party! pic.twitter.com/5mFFEQ7HOw

Michigan, this year, is considered as an important battleground state. Right now, Trump is leading Biden by roughly 1% in Michigan, according to a new poll from the Trafalgar Group. The president also maintained this slight lead over his Democrat rival in Michigan last month.

Do you think moderate liberals and Democrats will take up President Trump’s invitation for them to join the Republican Party? Let us know what you think will happen in the comments section below!