When President Trump holds rallies, turnout from the American people is never a problem. As a matter of fact, turnout at Trump rallies is so plentiful that venues hosting the events have to create sections for overflow.
Like many matters though, rally turnout is another area where the contrast between Trump and Biden couldn’t be more apparent. While the president packs arenas and has crowds that go wild for him, Biden barely gets enough people to fill a coffeeshop. 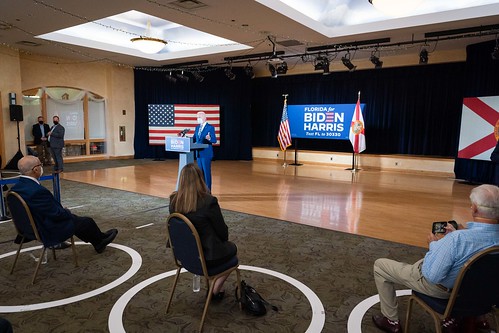 Many Americans view rallies as an indicative factor of where the support of the people lies. Yesterday, Lara Trump, wife to President Trump’s son Eric, ripped Joe Biden for his inability to generate large crowds like her father-in-law, as Breitbart News reports.

The Reality About Biden’s Low Turnout at Rallies

Lara Trump’s criticism of Biden’s rally turnouts arrived during an interview with Fox Business. Trump simply pointed out that while her father-in-law successfully garners crowds comprised of thousands, Biden typically pulls in less than 20 individuals.
In noting this very real contrast, Trump also stated that Americans can “very clearly see where the enthusiasm is” between Trump and Biden.

The president’s daughter-in-law then went on to state that President Trump has more loyal voters than Biden; per Trump, the president’s voters are likelier to stick it out in long lines whereas Biden’s voters may ultimately “take a hike.”
The lack of attendance at Biden’s events is something that multiple members of the first family have pointed out. Other Americans, too, are not buying polls alleging that Biden is leading Trump in certain areas. In fact, polls of this nature face routine censure for regularly oversampling leftists.

Meanwhile at the Trump Campaign

Trump’s remarks about Biden arrived on the same day that her father-in-law held a rally with supporters in Macon, Georgia.
Like other rallies hosted by the president, turnout resulted in the filling of the Middle Georgia Regional Airport, along with the airport’s overflow section. Trump talked about a series of matters, each of which generated cheers, chants, and applause from his audience of supporters.
https://twitter.com/TeamTrump/status/1317224162939854848
Meanwhile, as the president rallied in person yesterday, Biden — or the person who manages his social media accounts — sent out a series of tweets.
What do you think about Lara Trump’s assessment of turnout at Joe Biden’s rallies and campaign events? Let us know down below in the comments section.