The issue of illegal immigration continues to signify significant differences between Republicans and Democrats.

Traditionally, the GOP has put an emphasis on the importance of abiding by immigration laws. Republicans are also less likely to tolerate actions like hopping across the border, whereas Democrats have a tendency to excuse this type of behavior. 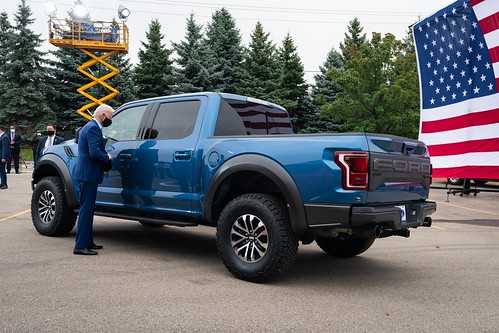 “Made In America Policy Speech at United” (CC BY-NC-SA 2.0) by Biden For President

The 2020 presidential election has shown that the contrast between Trump and Biden on immigration couldn’t be more apparent. While the president is committed to upholding legal immigration, the same cannot be said for the 2020 Democrat nominee.

According to Breitbart News, Biden has admitted that he would not deport illegal immigrants as president, unless they committed a felony.

What to Know About Biden’s Tolerance for Illegal Immigration

The former vice president has been very clear that illegal immigration is not something that he views as a problem. For starters, if Biden weasels his way into the presidency, he’ll grant amnesty to all of 11-22 million illegal immigrants who are currently in the states.

This is Donald Trump’s America after one term. Why would we give him a second? pic.twitter.com/E2dwc6R30h

Likewise, the 2020 Democrat nominee plans on halting all deportations for the first 100 days of his presidency, assuming that he wins. During an interview this week, Biden stated that his decision not to deport illegal immigrants, unless they commit a felony, is about “family, beginning, middle, and end.”

The former vice president then explained that he personally can’t fathom the notion of a family member experiencing deportation; in addition to vowing the reinstatement of DACA, Biden also credited illegal immigrants as a driving force for “why [America is] growing.”

Who Illegal Immigration Hurts the Most

In many cases, Democrats like Biden profess to be the fighters for the working-class; however, illegal immigration poses the greatest threat to so many working-class jobs that would otherwise be afforded to Americans.

Employers choosing to hire illegal immigrants under the table for the purposes of cheap labor is not unheard of; nonetheless, this inherently robs Americans of the opportunity to have that job and gradually work their way up the economic ladder.

What do you think about Joe Biden’s stance on illegal immigration? How do you think his policies would impact America’s working class? Let us know down below in the comments section.