The winner of this year’s tumultuous presidential election has yet to be announced.
Reports of voter fraud are being made in states like Wisconsin, Michigan, and Nevada. Social demonstrations and protests are breaking out across the nation as Americans want all legal votes to be counted, rather than discarded or tossed out. 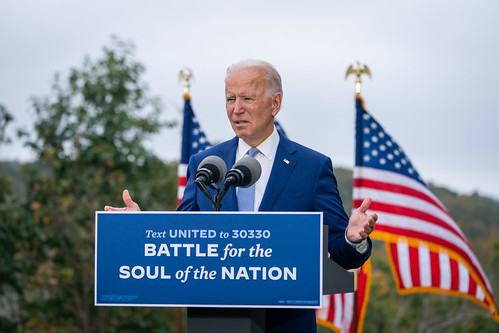 The mainstream media has worked overtime to create the illusion that Joe Biden has this election in the bag; the reality, however, is that it’s just too soon to tell. Right now, Trump could win Arizona, hence confirming that the Grand Canyon State was called too early for Biden.
Meanwhile, the president continues to hold clear leads in states like Alaska, Pennsylvania, Georgia, and North Carolina. None of these details have stopped the former vice president from turning his 2020 campaign website into a transition website, per Breitbart News.

The Hubris of the Biden Campaign

The Democrat candidate’s website moved from a campaign to a transition site after the media stated that Biden won Michigan and Wisconsin. It’s important for Americans to know that both of these states remain in heavy dispute.
For starters, Biden’s lead in Wisconsin is so narrow that the Trump campaign is within its rights to request a recount and has already done so; meanwhile, Michigan is still counting their votes, although reports of fraud are very much rampant in the Midwestern state.

Beware people who claim to be Trump supporters who are saying "it's over" and that "Biden won." Neither of these things is true. They aren't Trump supporters. They're just trying to make you give up so you don't even put up a fight.

In spite of all this, the Biden campaign believes in victory enough to set up a transition website. On the transition website, viewers can see words stating that “the American people” will ultimately decide the next president; likewise, Biden’s transition site also notes that vote counts remain underway in the country.
Finally, the website vows that a “Biden-Harris administration” will “hit the ground running” on issues relating to COVID-19, climate change, race, and the economy.

The Reality of the 2020 Election

Multiple lawsuits from the Trump campaign remain underway in various states. Reports of dumped ballots, the counting of ineligible or fraudulent ballots, etc., are each factors here. Meanwhile, some states are still reporting that days will pass before they finish counting votes.

Joe Biden got more votes than any other Presidential candidate EVER….

You know, the guy who got 38 people to his events.

Who ran the most uninspiring, unspectacular and pathetic campaign ever.

As things currently stand, there’s a very real possibility that the Supreme Court could wind up determining the 2020 election’s outcome. If the Supreme Court does get involved, then a Trump win is likely, due to the body’s current, conservative majority.
Do you think it’s too soon for Biden’s campaign to set up a transition website and commence talks of a “Biden-Harris administration?” Let us know in the comments section below!