Joe Biden has had quite a run throughout this 2020 presidential election. With Election Day being now present, voters will have the final chance to vote on whether they want Biden in the White House or another four years of President Trump.
The former vice president’s 2020 run for the White House has come under intense scrutiny nearly since its inception. Biden’s choice to insult voters, his tendency to slur words, forgetfulness of names, world leaders, places, etc., hasn’t boded well for him. Selecting Kamala Harris as a running mate has also presented some issues for the Biden campaign. 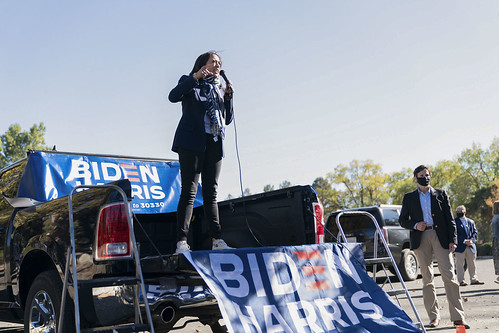 Yesterday, Biden made his last appeal to voters, despite claiming days prior that he doesn’t need votes to get elected.
The former vice president’s last drive-in rally happened in Pittsburgh, Pennsylvania; during this time, Biden made a series of loose promises and incendiary statements about President Trump, confirms Breitbart News.

While in Pennsylvania, the former vice president talked about the various challenges that the nation is currently facing. He also repeated his common campaign talking point about the USA being in “battle for the soul of America.”
As the speech continued, Biden took multiple shots at Trump, claiming that the 45th president brought about the downfall of honor, decency, and respect. The former vice president slurred and stammered a few times while talking; however, he did claim that Election Day (today) marks a new start.

WATCH: Joe Biden nearly falls over after being startled by Jill. Then he got angry. pic.twitter.com/vVGFXA9Pjv

Finally, Biden professed that if he is elected into the White House, he will “heal” the United States. Biden’s promise to heal the country comes after his vice-presidential candidate recently tweeted out a video endorsing communism and a government that ensures everyone has the same outcome.
Apparently, shutting down the country’s economy, forcing nationwide face mask mandates through government, and mandating the rushed COVID-19 vaccine are Biden’s ideas of “healing” and “[building] back better.”

The Final Day to Vote

With the arrival of Election Day, this Tuesday is the last chance Americans have to cast their vote in the 2020 presidential election.
While Biden spoke to a minimally sized crowd at his campaign function last night, Trump held five rallies on Monday. Each rally had thousands, if not tens of thousands, of eager and passionate supporters.
https://twitter.com/DebenedettiRob/status/1323490310404669440
The president, vice president, and others with the Trump campaign are urging Americans to get out and vote for four more years today, if they haven’t already.
What did you think about Joe Biden’s final drive-in rally for his 2020 presidential campaign? Let us in on your thoughts down below in the comments section.