For several weeks, Joe Biden spent time telling Americans that a federal mask mandate will arrive if he is elected as president of the United States. Both Biden and Harris even professed that such an order would come first and foremost under a Biden administration.
Since then, the former vice president has progressively walked this back. Towards the end of last month, Biden backed down a bit; during talks with the media, the former vice president professed himself to be a “constitutionalist.” 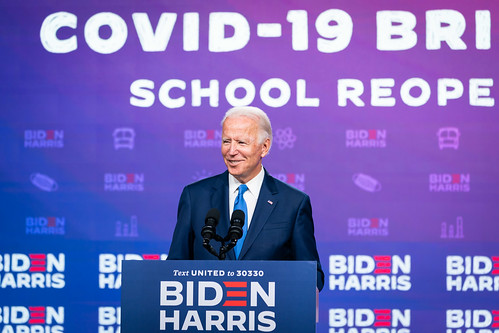 “Briefing and Press Conference Regarding” (CC BY-NC-SA 2.0) by Biden For President

Biden then stated that instead of issuing a mask mandate via executive order, he would “pressure” state officials, local leaders, and business owners to implement face covering requirements.
Yesterday, however, Biden admitted that a federal mask mandate would be inherently unconstitutional before stating that he, therefore, couldn’t implement one as president, details Breitbart News.

Biden now says a national mask mandate is probably unconstitutional and he wouldn’t do it.

This is a full 180-degree reversal. pic.twitter.com/cSxo6Q5LCD

Many of the Democrats who endorsed federal mask mandates, called for Trump to implement one, and praised Biden for his vow to enact one are now silent. Yesterday, the former vice president admitted: “there’s a constitutional issue” pertaining to whether the national government can order citizens to wear face masks.
Biden then stated that he “wouldn’t issue a mandate” because it’s not something the federal government can “constitutionally” do.

On Shutting Down the Nation Again

Believe it or not, a federal mask mandate is not the only policy that Biden has promised only to later walk back.
Last month, the former vice president and Kamala Harris, his running mate, participated in a joint interview with Robin Roberts. When asked about how he’d handle COVID-19 as president, Biden gave some telling answers. One answer included his admission that if scientists advised him to shut down the nation (again), he’d do so.

Be a patriot. Wear a mask. pic.twitter.com/LrXyfxphuD

This prompted intense backlash against the former vice president. Roughly a week or two later, Biden subsequently walked this back. He maintained that he didn’t see a “need” for another national shutdown to ever come.
What do you think about Biden admitting that he could not constitutionally implement a nationwide mask mandate as president? Let us know down below in the comments section.