Weeks ago, The Atlantic took heat after publishing a story with outright falsehoods about President Trump.

The story asserted that the president somehow trashed fallen and injured servicemembers. Almost immediately after the story aired, President Trump, the Trump family, the White House, and even people who are not in the Trump fan club came out, slamming the lies in The Atlantic’s story. 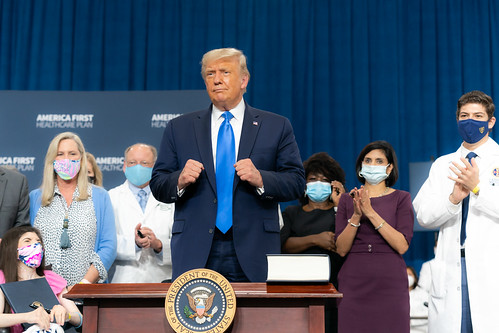 Biden, of course, made the most of the anti-Trump fake news. Seizing the moment, the Democrat nominee talked about his own love for the men and women in the U.S. military.

Unfortunately for Biden, though, actual video footage of him disparaging servicemembers to their faces recently surfaced and is making the rounds online, according to Townhall.

A True Assessment of Biden’s Outlook on the Military

The former vice president’s mockery towards the U.S. military is on video from March 2016 during his time in the United Arab Emirates.

Biden spoke before a crowd, making no qualms about telling the audience of servicemembers, or in Biden’s words “stupid bastards,” to clap for him. He then went on to accuse servicemembers, to their faces, of being “slow” and a “dull bunch.”

A video of Joe Biden saying “clap for that you stupid bastards” to military members and adding “you must be slow” is making its rounds online.

He made the remarks to 380th Air Expeditionary Wing on March 7, 2016, in Southeast Asia, and met with applause. pic.twitter.com/Th2wdF0VQE

Since the video footage came out, Biden’s campaign has attempted to smooth things over; the excuse provided is that the former vice president was merely “joking” as he insulted the men and women of the U.S. military to their very faces.

Since the resurfacing of the above footage, conservatives and American patriots have rightfully noted the double standard that presently exists here.

If Trump were caught on video insulting servicemembers to their faces, it would make national news. Yet, when Biden’s hand is caught in the cookie jar, the mainstream press looks the other way.

Joe Biden's campaign has confirmed the authenticity of the video where he is seen insulting our military men and women and calling them "stupid bastards."

In light of Biden mocking servicemembers right to their faces, it brings into question his professed love for the military. Referring to men and women in uniform as “stupid bastards,” “dull,” and “slow” doesn’t bode well for someone seeking to become commander-in-chief.

Moreover, if this is how Biden feels about the members of the United States military, then how does he perceive the average, everyday American?

What do you make of Joe Biden bashing servicemembers?  What mainstream media actions would ensue if President Trump mocked the military to their faces? Fill us in on your thoughts down below in the comments section.