Independence Day has a special place in many Americans’ hearts. Yesterday, folks across the nation congregated with loved ones and engaged in favorite pastimes; Americans also observed fireworks, and otherwise pondered on freedom in the United States. 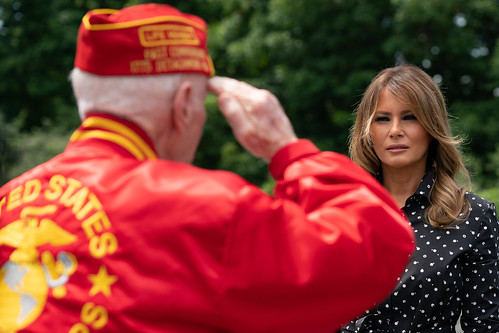 Of course, American heroes from the past and present play a significant role in our nation’s freedoms. Freedom is not free and must always be defended and fought for. This is something that President Trump reminded the country of yesterday when speaking to the nation during an Independence Day address.
Honoring the heroes who have fought and died for this nation served as a critical component of the president’s address, explains Fox News.

During his remarks, the president acknowledged brave Americans who fought against evil and set the tone for our nation going forward. Some instances of this bravery include, but are certainly not limited to, taking down fascists and ultimately defeated the Nazi regime.
https://twitter.com/realDonaldTrump/status/1279623260490039298
Additionally, Trump spoke about a “national garden” to be designed as a form of tribute to heroes of this nation. The president also stated that America will never “throw away” our past and present heroes, but rather show them honor and worthiness of their sacrifices.
Further points within the president’s speech covered American history and heritage.

Pushback Against the Left

In addressing the sanctity of our nation’s heroes, Trump also called out members of the left who seek the erasure of U.S. history.
The president firmly maintained that leftist agitators will not erode freedoms, destroy memorials or “indoctrinate” America’s youth. After these remarks, Trump also stated that the United States is presently on track to “defeating” the radical left-wing.

Trump’s remarks arrive as folks on the left act out in some egregious ways. Ripping down monuments and burning the American flag are just a few examples. Weeks ago, Trump subsequently signed an executive order criminalizing the destruction of federal monuments with ten years in jail.
In a later part of Trump’s address, he also confirmed America’s progress in the fight against coronavirus. The president noted an increase in testing and ventilators; shortly thereafter came word of a forthcoming vaccine or treatment.
What did you think of President Trump’s tribute address to American heroes and the nation itself? How did you celebrate your Independence Day? Let us know in the comments section below.