Millions of Americans across the nation suffered financially, due to coronavirus shutdowns. In so many cases, these shutdowns prompted the loss of careers, jobs, and businesses. Even now, numerous folks are still reeling and trying to get back on steady ground.

For the sake of softening the blow, the United States government sent out stimulus checks to most Americans. These payments largely arrived either via mail or directly into Americans’ checking accounts. Even as the nation reopens and gets the economy going again, there are talks about a second round of stimulus payments later this summer. 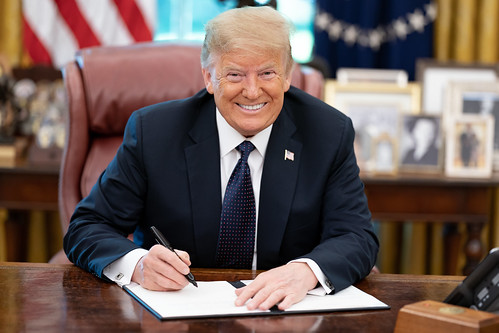 However, the first round of payments didn’t go off without a hitch as intended. As a matter of fact, Breitbart News reports that a grand total of $1.4 billion dollars in government aid went to Americans who are no longer alive.

Why Did Stimulus Payments Go to Dead Americans?

In a nutshell, the speed and haste in which the government sent out stimulus payments are responsible for so many dead people receiving funds.

To determine which Americans qualified for checks, the government reviewed prior tax filings; the only problem with this review is that some taxpayers have already passed since filing. Apparently, the government declined to take this into account while sending out money en masse.

Coronavirus deaths are way down. Mortality rate is one of the lowest in the World. Our Economy is roaring back and will NOT be shut down. “Embers” or flare ups will be put out, as necessary!

Payments made to dead Americans still carry the potential to benefit family members and immediate relatives with access to said funds. Despite the $1.4 billion dollars in misspent funding, this number accounts for barely a fraction of the nearly $300 billion dollars sent out to Americans by the government.

Can the Government Retrieve Funding from Dead People?

As the news of misdirected money breaks, some Americans are wondering whether the government will be able to retrieve said money. Apparently, this retrieval is easier said than done.

At this point in time, the U.S. Treasury Department would likely face issues and pushback if they did seek to get the money back. In some cases, relatives or others with access to the accounts of dead people may have already spent the money.

Public Citizen executive vice president Lisa Gilbert maintains that mishaps of this nature are probable when the government sends out billions of dollars in a hurry.

What do you think about learning that $1.4 billion dollars of coronavirus aid went to dead individuals? Let us know your takeaways in the comments section below!